IGF-1 LR3, also known as Long-Arginine-3-IGF-1, is an analogue of human IGF-1 that has been modified to include a 13 amino acid N-terminus extension and the substitution of Arginine for Glutamic Acid at position 3. As a result of these modifications, IGF-1 LR3 is approximately three times more potent than IGF-1 and possesses an increased half-life due to lowered affinity for binding to the Insulin-Like Growth Factor-Binding Proteins (IGFBPs). IGF-1 LR3 retains the ability to bind agonistically to the IGF-1 receptor with improved metabolic stability, relative to IGF-1. The supplementation of mammalian cell cultures with Long R3 IGF-1 at a much lower concentration results in more highly elevated productivity than with standard concentrations of insulin and/or standard IGF-1. IGF-1 LR3 is more able to stimulate the type 1 IGF receptor and thus induce a higher level of activation of intracellular signaling, which is responsible for promoting cell proliferation and the inhibition of apoptosis.

Igf1LR3 greatly boosts muscle mass by inducing a state of muscle hyperplasia (increase in number of new muscle cells) in the MUSCLE WHERE ITS INJECTED! So think of it as muscle cell proliferation, or even the splitting of the cell so 1 becomes 2... That's why its perfect on cycle when you get increased muscle cell growth too. But why is IGF better than HGH? The reason being is HGH causes IGF levels to rise in the liver first, then then the muscle, Whereas IGF-LR3 causes localized IGF levels to rocket. Igf1lr3 As you all know is the long acting version of Igf1, Taking its active potential up towards 20 hours, But along with its ability to stimulate the growth of satellite muscle cells and helping them to mature into new muscle fibers it holds the ability to increase the uptake of many supplements we currently use, And it can cause the enhanced recovery of testicle size, and prevent muscle loss even in PCT. Plus another reason its so potent is because of the decreased binding of Long R3 Igf1 to all known IGF binding proteins. These binding proteins normally inhibit the biological actions of IGF.. not so with this long acting version.

IGF-1 LR3 is a version of IGF-1 which is made not to react with IGFBG, therfore, it has increased activity, stability in comparison to the endogenous IGF-1. IGF-1 is released in the liver and binds to the IGF receptors within the cells, which ultimately causes a stimulation of cell growth (both causing new tissue formation and existing tissue growth) and an inhibition of cell death. IGF1 LR3 allows for many of the growth-promoting effects of growth hormone insulin-like growth factors also know as IGF's. IGF-1 LR3 comprises a family of peptides (protiens) that play important roles in mammalian growth and development. IGF1 LR3 is also known as Long R3 IGF-1 or Insulin-Like Growth Factor-I Long Arg3. The Long R3 IGF-1 version is significantly more potent than regular IGF-1. The enhanced potency is due to the decreased binding of IGF1 LR3 to all known IGF binding proteins. These binding proteins normally inhibit the biological actions of IGF's therefore IG-1 LR3 has been shown to have increased efficacy and function. This IGF-1 LR3 analog of IGF-1 has been created with the purpose of increasing the biological activity of the IGF peptide. IGF1 LR3 is also known as Long R3 IGF-1 or Insulin-Like Growth Factor-I Long Arg3. This is a human recombinant, single, non-glycosylated, polypeptide chain containing 83 amino acids and having a molecular mass of 9200 Daltons. IGF1 mediates many of the growth-promoting effects of growth hormone (GH; MIM 139250). The LR3 is a long-term analog of human IGF-1, specifically designed and manufactured for mammalian cell culture to support large-scale manufacturing of recombinant biopharmaceuticals. Early studies showed that growth hormone did not directly stimulate the incorporation of sulfate into cartilage, but rather acted through a serum factor, termed 'sulfation factor,' which later became known as 'somatomedin'. IGF-1 LR3 is the primary protein involved in responses of cells to growth hormone (GH): that is, IGF-I is produced in response to GH and then induces cellular activities. One such example is muscle growth or hyperplasia. This compound also makes the human body more sensitive to insulin. It is the most potent growth factor found in the human body. IGF-1 causes muscle cell hyperplasia, which is an actual splitting and forming of new muscle cells. The most effective form of IGF-1 is considered to be IGF-1 LR3. This formula has been chemically altered to avoid binding to proteins in the human body, and to increase the half life, approximately 20-30 hours.

IGF-1 (Insulin-like growth factor-1) is a major hormonal mediator of statural growth. Under regular circumstances, GH (growth hormone) binds to its receptor in the liver, and other tissues, and stimulates the synthesis/secretion of IGF-1. In target tissues, the Type 1 IGF receptor, that is homologous to the insulin receptor, is activated by IGF-1, leading to intracellular signaling which stimulates multiple processes leading to statural growth. IGF-1 metabolic actions are partly directed at stimulating the uptake of glucose, fatty acids, and amino acids so that metabolism
Igf1 is basically a polypeptide hormone that has the same some of the same molecular properties as insulin. IGF dose actually stand for insulin-like growth factor. Igf1 is mainly responsible for long bone growth in children and it also affects muscle growth and repair of adults. Long R3 Igf1 is a more potent version of Igf1. It's chemically altered i like to think "enhanced" to prevent deactivation by Igf1 binding proteins in the bloodstream. This results in a longer half-life of 20-30 hours instead of 20 min... So that means a far more effective version than the short chain we we re perhaps more familiar with.

It has a considerably longer half-life than other form, nearly 20-30 hours. When IGF-1 LR3 is active, has multiple effects on tissues in muscle cells. It plays a essential role in muscle renewal. IGF-1 LR3 encourages both increase as well distinction of stem cells. IGF-1 LR3 increases satellite cell activity, muscle DNA, muscle protein content, muscle weight and muscle cross sectional area. The importance of IGF-1 LR3 lies in the fact that all of its obvious effects work to induce muscle growth. These effects are enhanced when combined with weight training.
Protein creation is better along with amino acid absorption as a source of energy. It enhances use of fat as energy. In lean tissue, IGF-1 LR3 prevents insulin form carrying glucose across cell membranes, as a result, the cells have to change to burning off fat as a source of energy. IGF-1 LR3 also mimics insulin in the human body. Perhaps the most remarkable also strong influence it has on the human body is its ability to cause hyperplasia, which is an definite splitting of cells. Hypertrophy is what ensues during weight training; it is an increase in the size of muscle cells. Adult humans have a fixed number of muscle cells, that can become larger with training, however the number of muscle sells does not increase. But, with this preparation use you are able to induce hyperplasia which actually increases the number of muscle cells present in the muscle. Research studies show that with weight training the new cells develop faster and become stronger and more dense.

IGF-1 LR3 greatly boosts muscle mass by inducing a state of muscle hyperplasia (increase in number of new muscle cells) in the MUSCLE WHERE ITS INJECTED! So think of it as muscle cell proliferation, or even the splitting of the cell so 1 becomes 2. Igf1-lr3 As you all know is the long acting version of Igf-1, Taking its active potential up towards 20 hours, But along with its ability to stimulate the growth of satellite muscle cells and helping them to mature into new muscle fibers it holds the ability to increase the uptake of many supplements we currently use, And it can cause the enhanced recovery of testicle size, and prevent muscle loss even in PCT. Using this on cycle and during PCT. increased muscle retention and faster recovery. IGF-1-LR3 will cause even greater elevations in Igf and the potential for more muscle growth and fat loss through its unique ability to drain fat cells and supply muscle cells with vital nutrients. IGF-1 LR3 allows many growth factors in the category of IGFs to increase protein formation through nitrogen retention. The long version is more effective than the original IGF-1. It has an enhanced potency because of increased binding sites. The hormone is effective in accentuating hyperplasia. It is widely known for its activity in the splitting and formation of new muscle cells.

IGF-1 LR3 is a synthetic version of the natural insulin-like growth factor but with modification at position number 3 and an extension at amino acid number 13 at the B-termini. It is more potent than insulin-like growth factor 1. Moreover, research revealed that IGF1 LR 3 has a longer half-life than insulin like growth factor 3. The polypeptide plays a vital role in muscle renewal and it encourages production and differential of stem cells. IGF-1 LR3 is known to increase satellite activity of the cells, muscle protein content, muscle DNA, muscle cross-sectional area and muscle weight. The essence of the IGF1 LR 3 polypeptide lies in the fact that it induces muscle growth by enhancing hyperplasia. IGF-1 LR3 builds new muscle tissue by promoting nitrogen retention and protein synthesis. This causes the growth of muscles through both hyperplasia (which is an increase in number of muscle cells) and mitogenesis (which is the actual growth of new muscle fibers). Thus IGF-1 LR3 not only makes muscle fibers bigger, it makes more of them as well. Therefore, IGF can actually change the genetic capabilities in terms of muscle tissue and cell count. IGF increases and differentiates the number and types of cells present. IGF-1 LR3 is a synthetic analog of the naturally existing insulin growth factor (IGF) which is a 93 amino acid residue. Modifications of the natural form occurred with the substitution of the Arg with Glu at the position 3, giving a code R3, and also an extension of a 13 amino acid at the B-terminus. Just like IGF-1, R3 has been shown to induce the development and growth of cells.

Lyophilized LR3 IGF1 altho µ gh stable at room temperature for 3 weeks, should be stored desiccated below -18°C. Upon reconstitution the LR3 IGF1 should be stored at 4°C between 2-7 days and for future use below -18°C.For long term storage it is recommended to add a carrier protein (0.1% HSA or BSA).Please prevent freeze-thaw cycles. 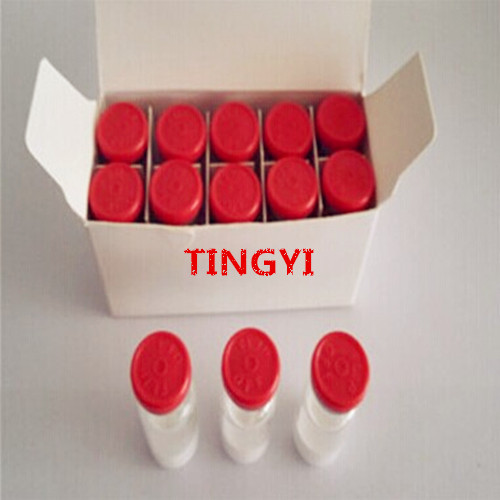